The Under Armour HOVR Phantom 2 is Under Armour's latest and greatest shoe. It improves upon its predecessor by providing extraordinary support and comfort during any activity such as walking, running, jogging, or sprinting (or even walking for that matter). With precision technology, the performance of the Phantom 2 can be expected to exceed any challenges or obstacles placed before it with ease. Let's see if the newly designed Phantom 2 shoes by Under Armour stack up to its predecessors with older models.

Affiliate Disclosure: This post may contain affiliate links, which means that I will be paid a commission at no cost to you if you make a purchase using the link in this post.

The HOVR Phantom 2 (Under Armour) may rather easily be mistaken as a pair of basketball shoes due to its bulky exterior. This is a rather chunky silhouette, and probably won’t sport the cleanest look (but then again, Under Armour was never really strong on aesthetics) with a more futuristic design compared to previous shoe models and it may take some time getting used to depending on one’s tastes. 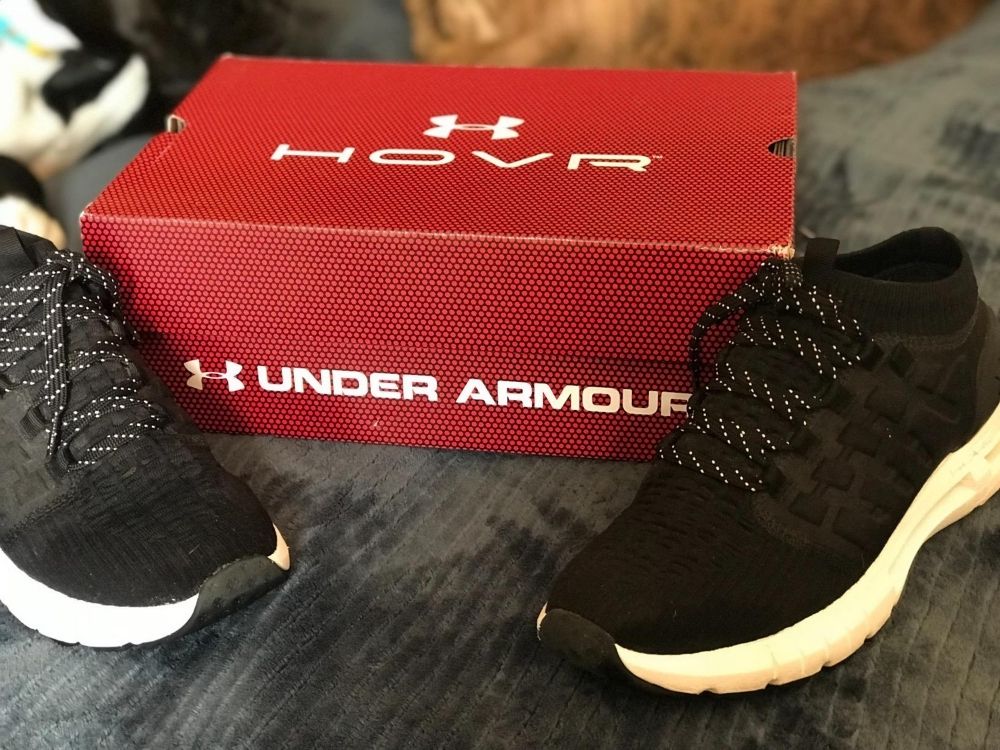 Being a runner, I was surprised when I first put on this running shoe. It had such a different feel than the shoes I was used to wearing. The sole of my foot couldn’t feel the hard road beneath it. Instead, there were small bumps that encompassed almost all of my foot except for some portions near the front and back. However, that did not bother me at all because this is a running shoe after all! While taking a jog down public roads and concrete sidewalks, transitioning from one point to another did not pose any problems for me whatsoever. The best part about it? This shoe felt light on my feet, unlike most other running shoes which often make me feel overburdened by their weight despite them appearing sleeker in design!

The cracked stone pattern on the bottom of the shoe hasn’t had any durability issues so far, but I can foresee nubs reducing in size at some point. It might just be my stride, but it feels like I am rubbing backward into the nubs when I toe off with my big toe.

This is where the magic happens. HOVR brings a new and innovative cushioning chemistry and design to Under Armour’s running shoe collection. The result is a lightweight shoe that is very bouncy, giving athletes an extra pep in their step. It works particularly well for players looking for a different energy return than what they’ve experienced from EVA stability shoes in the past. The price tag may stop some people from picking up this shoe but I’d say it’s definitely worth it if you’re into running or just want something new and fun to try out on your feet!

Under Armour did a good job keeping the ankle collar in place. The collar acts as a lightweight web to tighten your foot in the shoe so you have great control during lateral cutting so you’re not sliding around inside your shoes. This really works well when playing position flex, both when running down the court and when jumping for blocks so you don’t have to hold onto your shoes when trying to jump high or go strong into someone.

Using Under Armour’s own technology, the shoe is knitted from toe to heel for an incredible sock-like fit. The knit has an open mesh upper with synthetic overlays for support. Its seamless forefoot without any seams allows the texture and pattern of the shoe to come through unblemished – truly eye-catching. The midfoot panels run all the way into the heel counter, creating a supportive base for the shoe. And in between these two areas lies a padded ankle collar to ensure there’s supreme comfort in this ever so awe-inspiring epic design!

One thing Under Armour almost always gets right is fit and the UA Hover Phantom 2 is no different. I wear a size 9 and the fit is true to size for me. If you want a tighter fit, go down a half. The upper of the shoe is soft and comfortable, which doesn’t cause any discomfort or chafing during my runs. This shoe could be worn without laces, but something about a shoe with lace loops and no laces just seems… off. There’s minimal heel slip and I didn’t experience any pinching from this shoe at all.

While the knit uppers on the Hover Phantom 2 are fantastic in terms of breathability, this design (with no overlays for stability) did cause some concern in the area of support with containment being my main issue. I felt like my feet were slightly too snug with too much forward movement causing me to adjust my position on the fly when going downhill simply because I could feel myself sliding despite not suffering any actual discomfort or pain.

The Phantom 2 comes with a sturdier midfoot construction, which really enhances the connection between your foot and the shoe. This design feature prevents the foot from dropping too far, especially when switching to level zero or zero drop modes. Also, this midfoot stability contributes towards less stress on the forefoot – which means you will have more support without sacrificing comfort. It even prevents over-pronation in runners who are very prone to doing so! However, during my runs on some trails that were more challenging, I did notice that it began to lack support after I ran on them for an extended period of time. A quality ankle strap would not have hurt either because sometimes you have to cross large rocks at times along the trail… But these minor inconveniences are ones most people can afford not having anyway if they love running as much as I do!

The UA HOVR Phantom 2 is exactly what a runner’s second shoe should be – a progression with improvements on problem spots. With a slimmer, lighter midfoot and a new knitted upper, the Phantom 2 checks all the boxes for someone looking for a shoe that can go anywhere and do anything. It also scores high on versatility – ideal for someone who needs a pair of kicks to handle running along with activities like weightlifting or extracurricular activities.

Learn more about Women HOVR™ Phantom 2 IntelliKnit Shoe by Under Armour from their official website!